Under the Federal Election Campaign Act (the Act), certain contribution limits are indexed for inflation every two years, based on the change in the cost of living since 2001, which is the base year for adjusting these limits.[FN1]

The inflation-adjusted limits are: 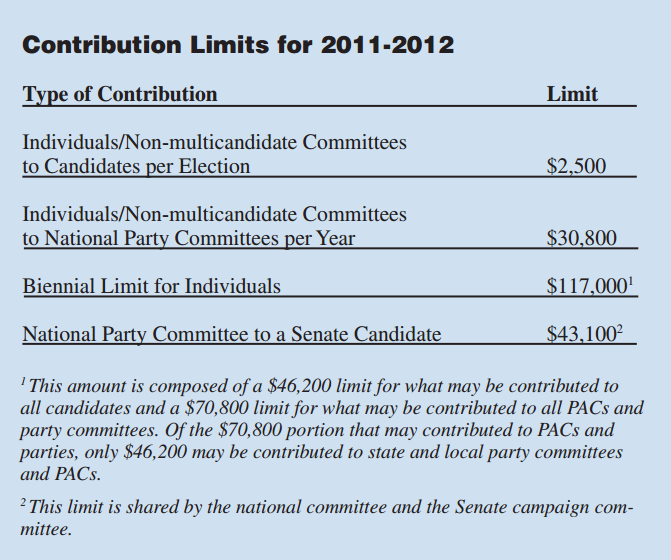 Please see the chart above for the contribution amount limits applicable for 2011-2012. The inflation adjustments to these limits are made only in odd-numbered years. The per-election limits on contributions to candidates are in effect for the two-year election cycle beginning the day after the general election and ending on the date of the next general election (i.e., November 3, 2010 – November 6, 2012). All other contribution limits are in effect for the two-calendar-year period beginning on January 1 of the odd-numbered year and ending on December 31 of the even-numbered year (i.e., January 1, 2011 – December 31, 2012).

Please note, however, that these limits do not apply to contributions raised to retire debts from past elections.

Contributions may not exceed the contribution limits in effect on the date of the election for which those debts were incurred. 11 CFR 110.1(b)(3)(iii).

The Act also includes a rounding provision for all of the amounts that are increased by the indexing for inflation.[FN2] Under this provision, if the inflation-adjusted amount is not a multiple of $100, then the amount is rounded to the nearest $100.