An earmarked contribution is a contribution which a contributor directs to a clearly identified federal candidate or a candidate’s authorized campaign committee, either orally or in writing, through a conduit or intermediary. Earmarking may be done in the form of a designation, instruction, or encumbrance, and may be direct or indirect, express or implied. The Federal Election Campaign Act (the Act) and Commission regulations require special disclosure of earmarked contributions that are received by candidates and their authorized campaign committees. Conduits and intermediaries are also required to follow special disclosure rules, including those conduits/intermediaries who are not registered committees with the FEC, such as individuals or partnerships.

A conduit or intermediary is anyone the campaign has not authorized to raise funds who receives and forwards an earmarked contribution to the candidate or candidate’s authorized campaign committee. Individuals, political committees (including political party committees and political action committees (PACs)), partnerships, and unregistered organizations (such as unregistered PACs or groups) may serve as conduits for earmarked contributions. (Note that the terms “conduit” and “intermediary” are interchangeable; “conduit” will be used in the remainder of this article.)

Persons who are not considered conduits

Furthermore, no individual may receive a contribution on behalf of a candidate (as a conduit or otherwise) while acting as the representative of a corporation, labor organization, or any other entity that is prohibited from making contributions.

Forwarding earmarked contributions to a campaign

Any person who receives a contribution (earmarked or otherwise) for a candidate’s authorized committee must forward that contribution to the recipient campaign committee within 10 calendar days of receiving the contribution.

Transmittal reports to the recipient campaign

When forwarding earmarked contributions to a candidate’s campaign committee, a conduit must include a transmittal report containing certain information, depending on the amount of the contribution.

For an earmarked contribution that exceeds $50, the accompanying transmittal report by the conduit must contain the following information:

For an earmarked contribution that exceeds $200, the accompanying transmittal report by the conduit must contain all of the following information:

The committee must also disclose the following information on its FEC report: 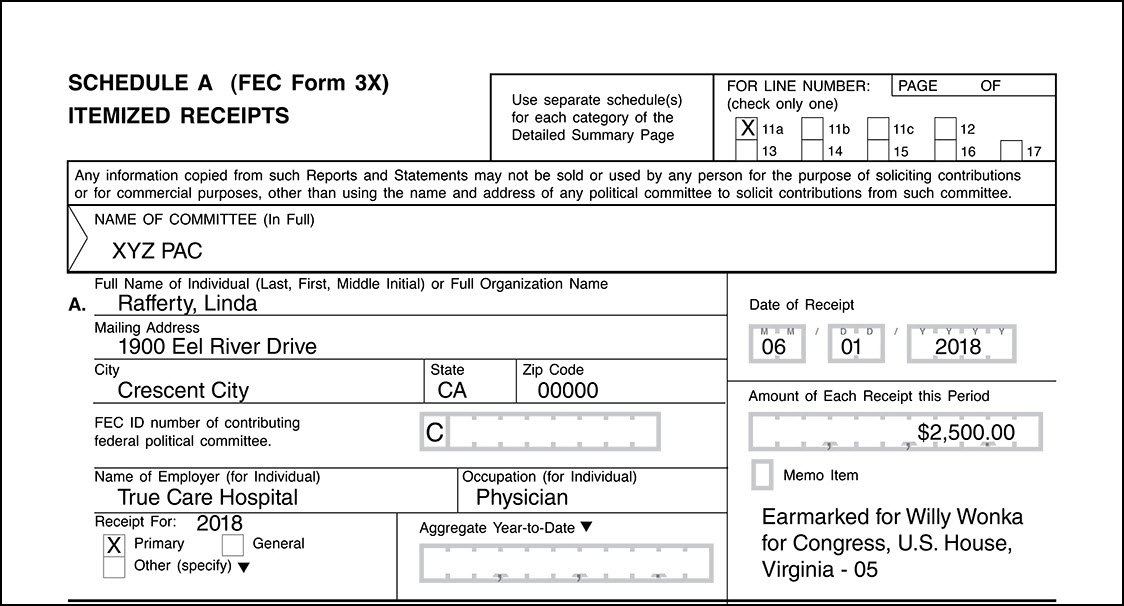 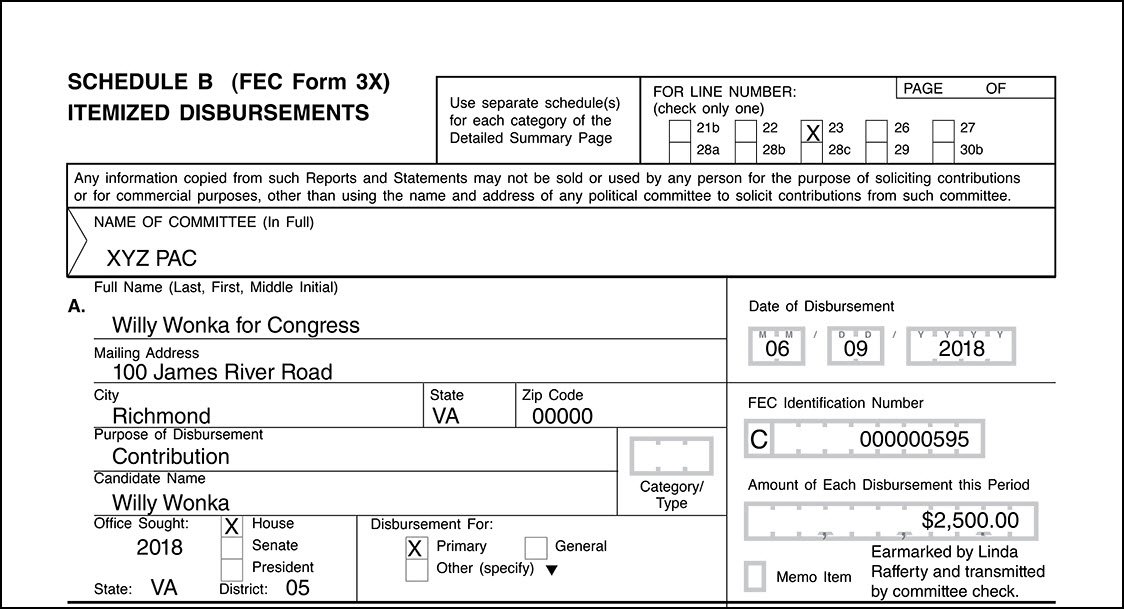 A conduit that is not a registered political committee with the Commission (e.g., an individual, partnership, etc.) must, within 30 days of forwarding the earmarked contribution(s) to the recipient candidate’s committee, file a report by letter with the FEC that discloses the following information:

Conduit reports by unregistered conduits must be sent directly to the FEC at the following address:

Please note that any deliveries of conduit reports made by delivery services such as FedEx, UPS, or DHL should use the same street address above with zip code 20002 instead. 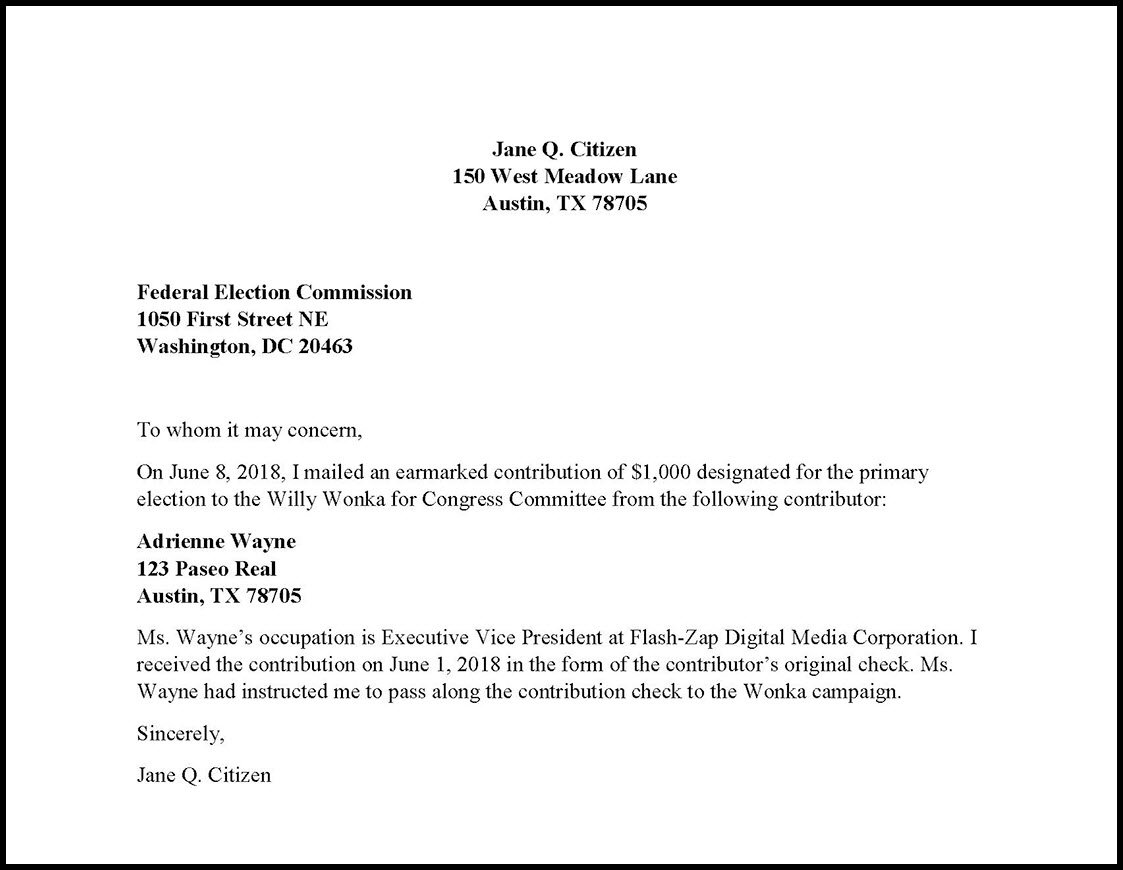 This example notes the individual serving as the conduit who has forwarded the contribution to the candidate’s committee and contains all the relevant information. Conduit reports by unregistered persons must be sent directly to the FEC. Please note that conduit reports received by the FEC are made public.

See the next section for an example of how the candidate committee should report the receipt of this particular earmarked contribution.

If a campaign committee receives an earmarked contribution of $1,000 or more from a conduit between 20 days and 48 hours prior to an election in which the candidate is participating, the committee must file a 48-Hour Notice for this contribution within 48 hour of its receipt from the conduit. For more information about 48-Hour Notice requirements, see the Commission’s webpage on 48-Hour Notices. 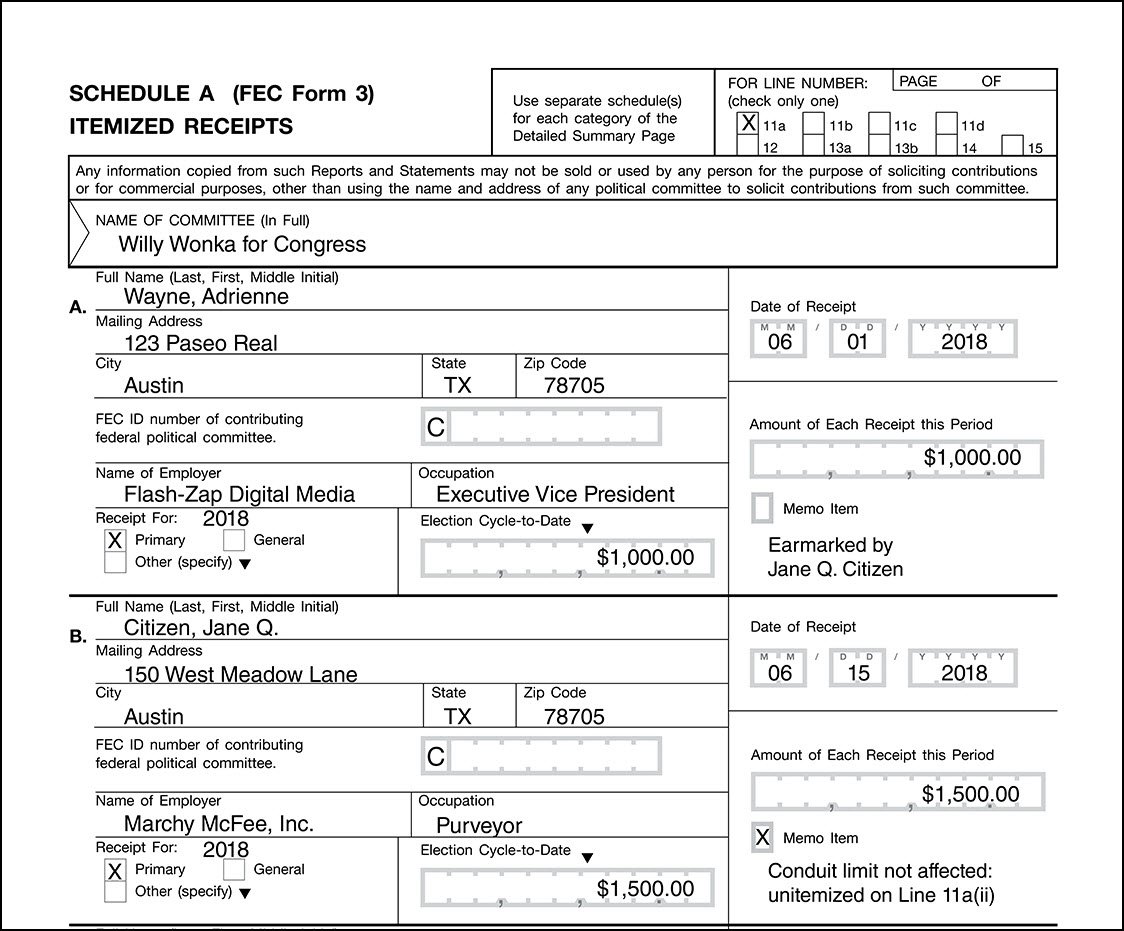 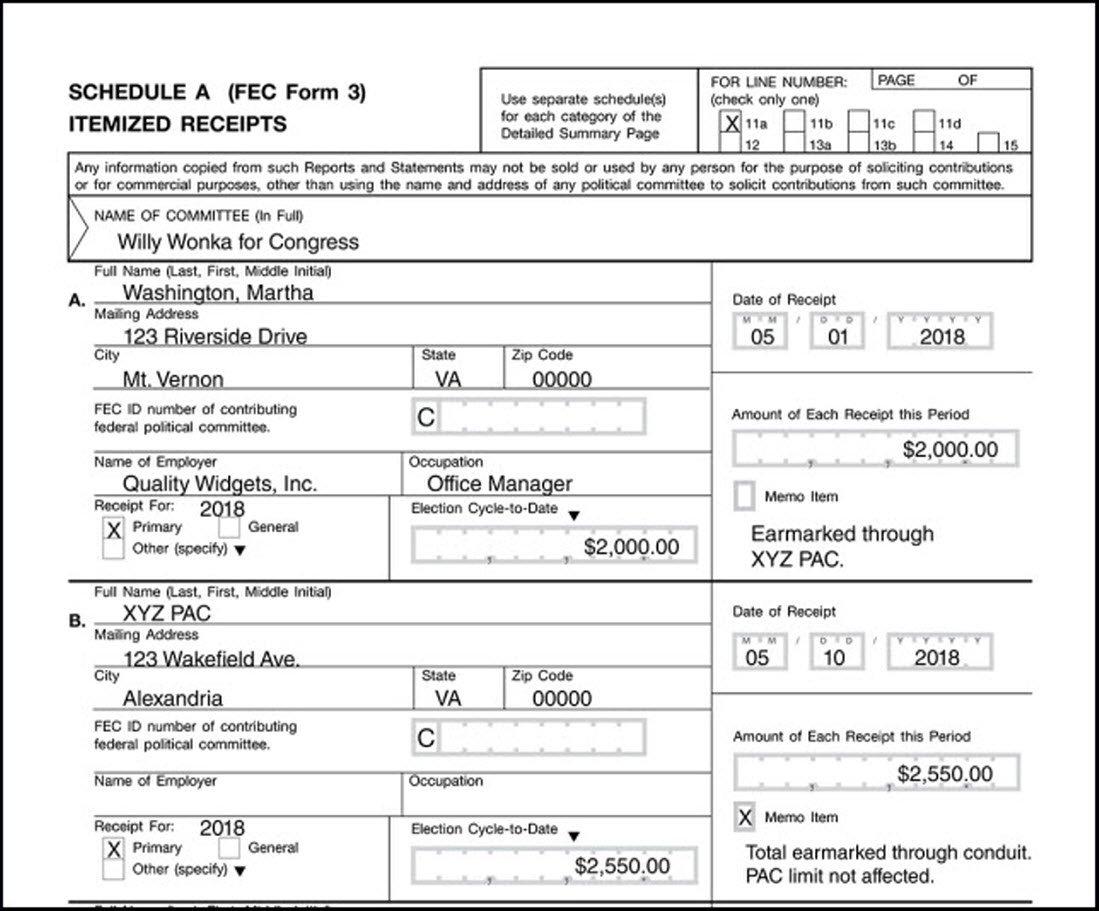 The recipient candidate committee should also include a memo entry (Line B above) that discloses the name of the conduit (XYZ PAC here), the total amount forwarded by the PAC, and the candidate committee’s date of receipt of the earmarked contributions from the PAC. In order to clarify that the PAC did not exercise direction or control over the choice of the recipient candidate, the campaign may wish to note in the memo text field that the PAC’s contribution limit to the candidate is not affected.

A member of the restricted class who contributes to an SSF through a payroll deduction program may subsequently earmark those contributions for specific candidates, subject to the requirements outlined. Such a program is sometimes referred to as “deferred earmarking.”

Ledger accounts. The SSF must keep a ledger account of each individual’s payroll deduction contributions. In the case of a program set up for earmarking after the deduction is made, this accounting method assures that the funds will not be used until the contributor designates them for a specific candidate. In one program (AO 1995-15 (Allison Engine PAC)), funds that were left undesignated past the deadline set for designation were available for use by the SSF.

AO 1991-29
Contributions to an SSF “pledge program” that are then earmarked to the candidates of a contributor’s choice; partially superseded by regulations at 11 CFR 114.2(f)(2)

AO 1986-04
Earmarking through a corporation prohibited without an SSF; direction and control

Explore help for candidates and committees »