The Federal Election Campaign Act and Commission regulations require special reporting of certain contributions that are collected or "bundled" by lobbyists/registrants, or by political action committees (PACs) that are established or controlled by lobbyists/registrants, on behalf of authorized committees of federal candidates, political party committees, and leadership PACs. Committees receiving these contributions must file Form 3L and disclose certain information about any lobbyist/registrant or lobbyist/registrant PAC that forwards, or is credited with raising, two or more bundled contributions aggregating in excess of a specific reporting threshold within a certain "covered period" of time. These requirements apply to both in-kind and monetary contributions. The reporting threshold for calendar year 2022 is $20,200.

All campaign committees, leadership PACs, and political party committees must file Form 3L when they receive two or more bundled contributions that aggregate in excess of $19,300 from a lobbyist/registrant or lobbyist/registrant PAC during a particular "covered period." The threshold amount is indexed annually and updated amounts are typically announced early in each calendar year.

The House and Senate websites identify registered lobbyists and registrants, while the FEC website identifies whether a political committee is a lobbyist/registrant PAC. A computer printout of a screen capture showing the absence of the person’s name on the House, Senate, or FEC websites on the date in question may be used as conclusive evidence demonstrating that the reporting committee consulted the required websites and did not find the name of the person in question. However, a reporting committee is subject to the disclosure requirements if it has actual knowledge that the person's name is required to be listed on one or more of these websites.

Each PAC that qualifies as a lobbyist/registrant PAC must indicate this designation on its Form 1 (Statement of Organization). Newly-formed committees filing Form 1 for the first time must disclose this designation on their initial filing. Existing committees that qualify as lobbyist/registrant PACs must amend their Form 1 within 10 days of any change to the information disclosed.

This list is not exhaustive, and "designations or other means of recognizing that a certain amount of money has been raised" need not be in writing.

There are two overlapping covered periods for filing Form 3L:

All reporting committees with bundled contributions to disclose must file a report covering the semi-annual periods of January 1 through June 30 and July 1 through December 31. Totals for the first six months of the year will appear on quarterly filers' July 15 report and on monthly filers’ July 20 report. All reporting committees must disclose totals for the second half of the year on their January 31 Year-End report. (In a non-election year, committees that file only semi-annually should file Form 3L on July 31 and January 31 of the next year.) A semi-annual report is required only if the committee exceeded the reporting threshold for bundled contributions during that specific semi-annual period. However, if the threshold has not been exceeded during that particular semi-annual period, a semi-annual report is not required. 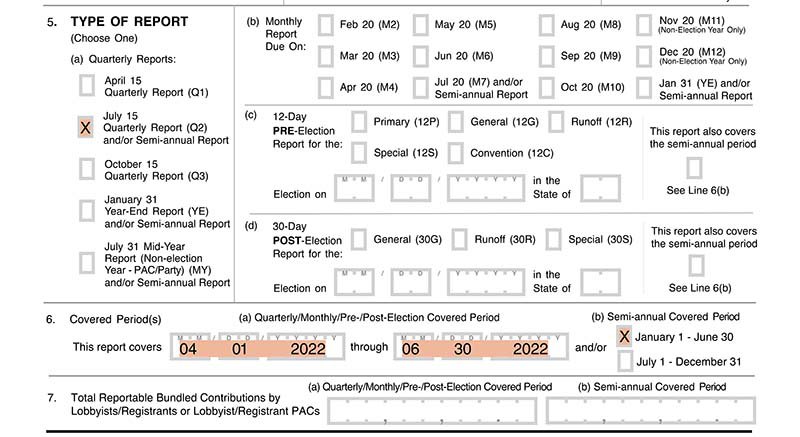 For reporting committees that file normal disclosure reports on a monthly basis, the covered periods include the semi-annual periods above and each month in the calendar year, except that in election years they file for the pre- and post-general election reporting periods in lieu of the November and December reports. Alternatively, monthly filers may choose to file lobbyist bundling reports on a quarterly basis, provided that they notify the Commission in writing of its intention to do so. The reporting committee may change its filing frequency no more than once per calendar year.

Reporting committees that must file Form 3L after crossing the lobbyist/bundling threshold in any covered period must disclose the following:

Example of disclosing a bundled contribution on Form 3L, Schedule A: