A nonconnected political committee may accept contributions in the form of bitcoin digital currency. It may also purchase bitcoins as an investment, but must sell the purchased bitcoins and deposit the proceeds from those sales into its campaign depository before spending the funds. The Commission was unable to approve a response by the required four affirmative votes as to whether a nonconnected committee may purchase goods and services using bitcoins it has received as contributions.

Make Your Laws PAC, Inc. (“MYL”), a nonconnected PAC registered with the FEC, wants to accept bitcoin contributions of up to $100 per contributor per election. Under its proposal, MYL would use an online form to request the contributor’s name, address, occupation and employer, and to affirm that the donor is not a foreign national and owns the bitcoins to be contributed. Only after a contributor provides this information will MYL provide that contributor with a one-time “linked address” by which to contribute bitcoins. MYL also wants to purchase bitcoins itself on open exchanges. For bitcoins received via contributions and by purchase, MYL proposes to either sell them for U.S. dollars, hold them for later sale, or disburse them in bitcoin form to pay for various administrative expenses associated with running the committee.

Receipt of bitcoin contributions. The Federal Election Campaign Act (the Act) defines a contribution as “any gift, subscription, loan, advance, or deposit of money or anything of value made by any person for the purpose of influencing any election for Federal office.” 2 U.S.C. § 431(8)(A)(i); 11 CFR 100.52(a). “Anything of value” includes “all in-kind contributions.” 11 CFR 100.52(d)(1). Committee treasurers must examine all contributions the committee receives to ensure that they comply with the Act’s contribution limits and source prohibitions, and must either deposit contributions into a campaign depository within 10 days of receipt, or return them to the contributor. 2 U.S.C. § 432(c)(1)-(3) and (h) and 11 CFR 103.3(a) and (b).

The Commission concluded that bitcoins may be accepted as contributions under the Act. The screening procedures described in MYL’s request adequately satisfy its obligation to examine all contributions and to determine the eligibility of its contributors.

While holding bitcoins in a bitcoin wallet does not satisfy the Act’s requirement to deposit funds into a “campaign depository”1 within 10 days of receipt, Commission regulations allow committees to accept and receive contributions in the form of stocks, bonds, art objects and other similar items that cannot be deposited upon receipt, but will be liquidated at a later date. 11 CFR 104.13(b). The Commission concluded that bitcoins are like these items, and need not be deposited in a campaign depository within 10 days. Instead, bitcoins may be held in MYL’s bitcoin wallet until the bitcoins are liquidated. See Advisory Opinions (AOs) 2000-30 (pac.com) and 1989-06 (Boehlert).

Bitcoin transactions made by MYL. The Commission concluded that MYL may itself purchase bitcoins. Commission regulations allow a committee to transfer funds from the committee’s campaign depository for investment purposes. However, funds must be returned to the campaign depository before they are used to make committee expenditures. 11 CFR 103.3(a). See, for example, AOs 1999-08 (Specter) and 1986-18 (Bevill).

Bitcoin sales and disbursements. Finally, the Commission concluded that MYL’s plan to sell its own bitcoins and deposit the proceeds would satisfy the campaign depository requirement of 11 CFR 103.3(a). However, the Commission could not approve a response by the required four affirmative votes as to whether MYL may purchase goods and services with bitcoins it has received as contributions.

Reporting bitcoin transactions. MYL should report the initial receipt of bitcoins much like in-kind contributions; any usual and normal fees deducted by the bitcoin processor should not be deducted from the reported value of the contribution. Those fees should instead be reported as operating expenditures. 11 CFR 102.9(b) and 104.3(b)(3) and (4). 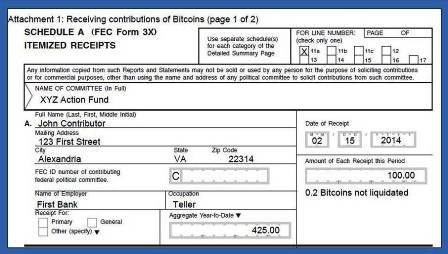 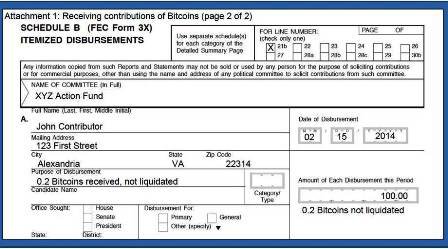 The method of reporting the subsequent liquidation of bitcoins will depend on whether the bitcoin purchaser is known or unknown to the committee. If MYL sells the bitcoins directly to a purchaser and therefore knows the identity of that purchaser, the purchase itself is considered to be a contribution from the purchaser to MYL. 11 CFR 104.13(b)(2) and AO 1989-06 (Boehlert). 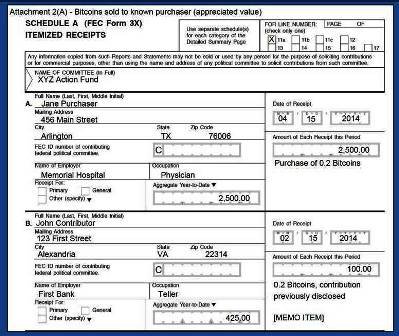 Examples of reporting bitcoin transactions are included in the Commission’s Advisory Opinion and are shown above.