A committee can receive bitcoins as contributions. The Act defines a “contribution” to include “any gift, subscription, loan, advance, or deposit of money or anything of value made by any person for the purpose of influencing any election for Federal office.” In Advisory Opinion 2014-02, the Commission concluded that bitcoins are "money or anything of value" within the meaning of the Act.

Step 1: Bitcoins reported as a receipt

John Contributor gives the committee 0.2 bitcoins, valued at $100. The committee itemizes this contribution on Schedule A, supporting Line 11(a)(i). It includes the contributor’s mailing address, employer and occupation. It also reports details about the bitcoin contribution, including its value, the date it was given, election designation, and aggregate election cycle-to-date total for John. The committee also includes a notation that 0.2 bitcoins were given and that the committee has not liquidated the bitcoins.

Step 2: Bitcoins reported as a disbursement 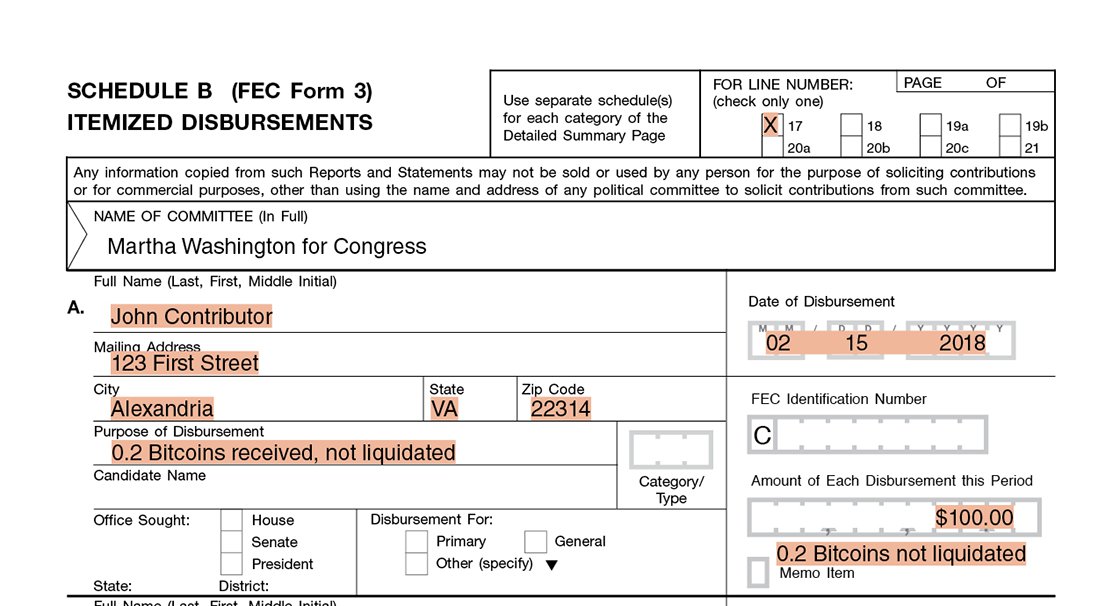 The committee also reports the value of the bitcoins as a disbursement to avoid inflating their cash on hand. The payee is the contributor’s name, John Contributor. The purpose of disbursement clearly states “0.2 Bitcoins not liquidated.”

Any usual and normal fees that the processor charges should not be deducted from the reported value of the contribution. The committee should report the usual and nominal fees and commissions that it pays to an online processor as an operating expenditure.