Francine filer is helping out a friend who’s running for office. Although it is late in the evening on the day the report is due, she has read the guidance on the FEC’s website. She opens FECfile with the idea of filing a report for her friend.

She turns to Google for help, but she cannot find the information she needs in order to be sure that she understands what dates to input.

Filers often have trouble with election cycles. If the election cycle is incorrect, the filer will get a letter because their columns A and B cycle-to-date totals will be wrong.

One analyst estimated that nearly every time column B is wrong on federal candidate committee reports, it is because the election cycle is incorrect.

Because it is after business hours, Francine cannot call the FEC for help, and she is afraid of what will happen if her report is late.

Francine makes her best guess that “election cycle” is the start and end dates for the reporting period. Although this is incorrect, the system accepts this answer, so Francine is able to submit her report on time.

The data in Francine’s report becomes publicly available on the FEC’s website, but because the election cycle dates are not right, the cycle-to-date totals are off, which make the data difficult for many journalists to interpret. At the same time, Francine’s report goes to the Reports Analysis Division where an analyst finds the error and sends Francine a Request for Additional Information (RFAI)

A little while later, Francine receives the RFAI letter in the mail. The letter is official looking, which she finds intimidating. She is not sure what the letter is asking her to do, and she is afraid of the consequences.

Francine calls RAD for help resolving the issue. An analyst patiently walks her through how to resolve the issue, which includes filing report amendments. This conversation takes an hour.

The data in the amendments becomes public on the FEC’s website where our journalist struggles to make sense of them and how they tie back to previous reports. At the same time, a RAD analyst reviews the amendments, looking again for errors, which, if found, will repeat the cycle all over again. 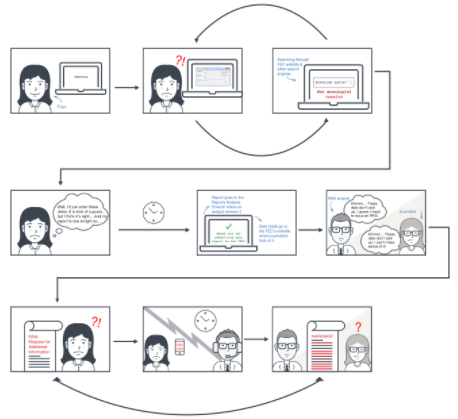 Recommendations from studying the filer experience

Get help from the FEC by phone or email