After an election, some House and Senate campaigns have outstanding debts, including money owed to campaign vendors. Campaigns must report debts and obligations continuously until repaid.

Calculating a campaign’s “net debts outstanding” is a two-step process. First, a campaign tallies up all of its unpaid debts as of the election date. Unpaid debts include all outstanding debts and obligations, and the estimated cost of raising funds to pay off the debts. If a campaign is terminating, estimated winding down costs are included as unpaid debts.

Second, a campaign subtracts its cash-on-hand and any amounts owed to the campaign or candidate from its unpaid debts. The resulting amount is a campaign’s net debts outstanding. If a candidate has loaned more than $250,000 per election to a campaign, then any amount over $250,000 per election is not included in net debts outstanding (see “Repaying Candidate Loans” below for more information).

The campaign continually recalculates its total net debts outstanding as additional funds are received for, or spent on, the election for which the debt remains.

When raising contributions to retire debts after the election is over, a campaign must remember three general rules: 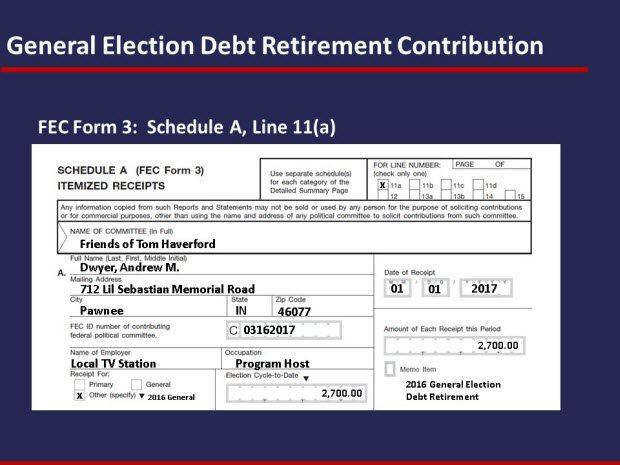 Under certain conditions, committees may sell certain assets (such as campaign office equipment and mailing lists) at the “usual and normal charge” to raise funds to retire debts without the sale resulting in a contribution from the purchaser. For more information, see Advisory Opinions 2003-19, 2002-14, and 1986-14.

Disclose the sale of committee goods or services on Line 15 of Form 3 and itemize on Schedule A for that line if aggregates over $200 for the election cycle. See Example B below. 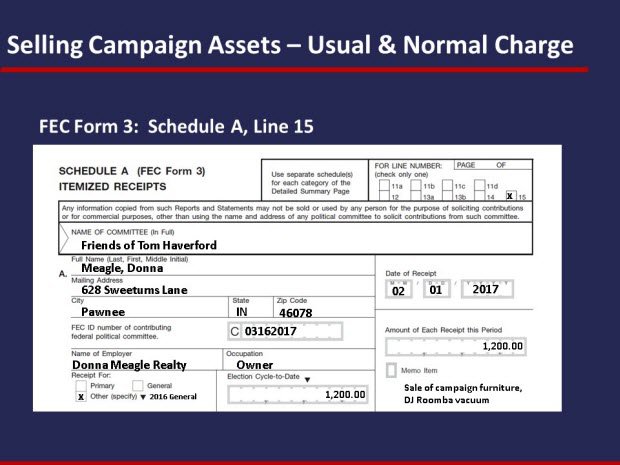 A debt of $500 or less is reportable on the next regularly scheduled report once it has been outstanding for 60 days from the date incurred (the date of the transaction, not the date the bill is received). Report debts on Schedule D until they are fully repaid. Debts exceeding $500 are disclosed in the report covering the date on which the debt was incurred. See Example C below.

If the exact amount of a debt is not yet known, the treasurer may report an estimated amount, noting that the figure is an estimate. Once the committee knows the actual amount, the treasurer must either amend the earlier report (and all subsequent reports) to indicate the correct amount, or include the correct figure with an explanation of the change in the campaign’s next report.

The disclosure of a disputed debt is not an admission of liability or a waiver of any claims against the creditor. Once a dispute is resolved, report the correct amount on the next report, with an explanation of its resolution.

A committee with an unpayable debt, such as a debt owed to a defunct or unresponsive entity, should call its Reports Analysis Division (RAD) analyst for assistance. RAD typically advises committees to file a statement that includes a request to discontinue reporting the debt, an explanation of why the debt is unpayable, and what efforts the committee has made to contact the vendor. Committees must continue to report the debt until they verify with RAD that a debt no longer needs to be reported.

Candidates may lend money from their personal funds to their campaign committees and may charge a commercially-reasonable interest rate.

Report the receipt of the loan from the candidate on Schedule A, Line 13(a) of Form 3 regardless of the amount of the loan. Also report the loan on Schedule C until it is fully repaid. Include all loan terms on Schedule C. If there is no due date or interest rate, enter “none” or “n/a,” but do not leave these fields blank. Include the term “personal funds” on either Schedule A or C. See Example D below. 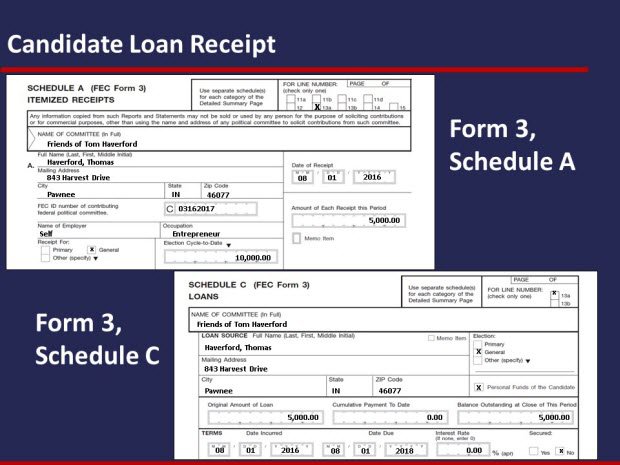 If the candidate makes loans to the campaign that exceed $250,000 per election, the following rules apply:

Report loan payments on Schedule B, Line 19(a) of Form 3 and on Schedule C. See Example E.

Report interest payments as operating expenditures. Itemize on Schedule B, Line 17 of Form 3, once payments exceed $200 in the election cycle. See Example F. 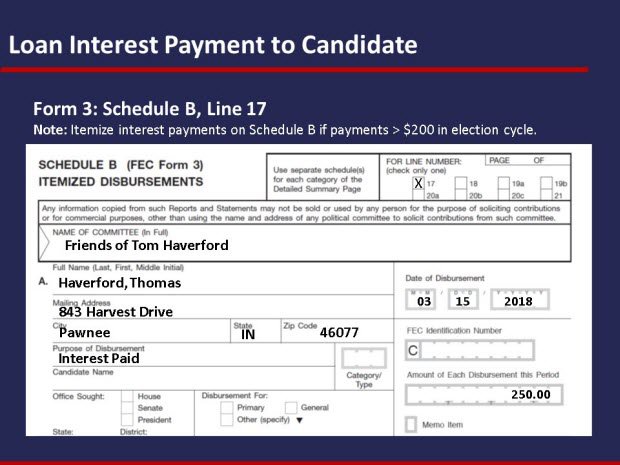 If the candidate obtained a bank loan or other line of credit and loaned that money to the campaign, the committee must follow special reporting instructions. List the candidate as the loan source and identify the type of loan. A candidate loan is reported regardless of its amount. Report loans continuously on Schedule C until they are fully repaid. Committees disclose all the loan terms between the candidate and the committee on Schedule C. If there is no due date or interest rate, enter “none” or “n/a”, but do not leave these fields blank. See Example G. 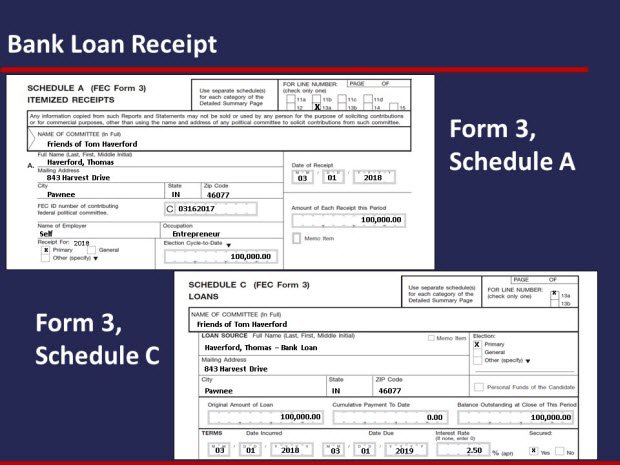 The committee also must file a Schedule C-1 to disclose the terms between the candidate and the bank. See Example H. 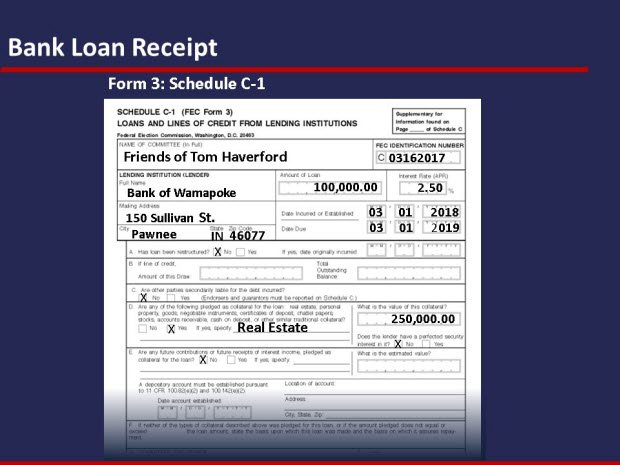 For bank loans, report repayments on Schedule B, Line 19(b) of Form 3. Report interest payments on Line 17 of Form 3 once payments exceed $200 in the election cycle. See Examples I and J.

Example I: FEC Form 3 Schedule B, Line 19(b) and Schedule C: Loan Repayment to Bank