A committee that has invested its funds—for example, in a savings account, money market fund or certificate of deposit—must include the total amount invested in its cash on hand (Line 27 of Form 3). Since investment money is not actually spent, it is considered a committee asset and should not be reported as a disbursement.

If committee funds are invested in a fund that is not operated by a bank (such as a money market fund operated by a brokerage firm), no amendment to the Statement of Organization is required. Before using the funds (principal or interest) to make expenditures, the committee must first transfer them to a designated campaign checking account.

Note, however, that interest or other income earned on these investment accounts need not be placed in the campaign depository account before they are reinvested. Investments are not expenditures; they are simply a conversion of assets from one form to another. The committee must report the reinvested income from investments.

House and Senate committees report interest received or lost during the reporting period in the “Other Receipts” category on Form 3, Line 15. If investment income from one source aggregates over $200 during an election cycle, itemize the interest on Schedule A, supporting Line 15. Losses are indicated by negative entries.

In addition, a committee reports income tax paid on investment income as an operating expenditure. Income tax payments must be itemized on a Schedule B supporting Line 17, “Operating Expenditures,” if the payments aggregate over $200 during an election cycle to the payee (local, state, or federal government). 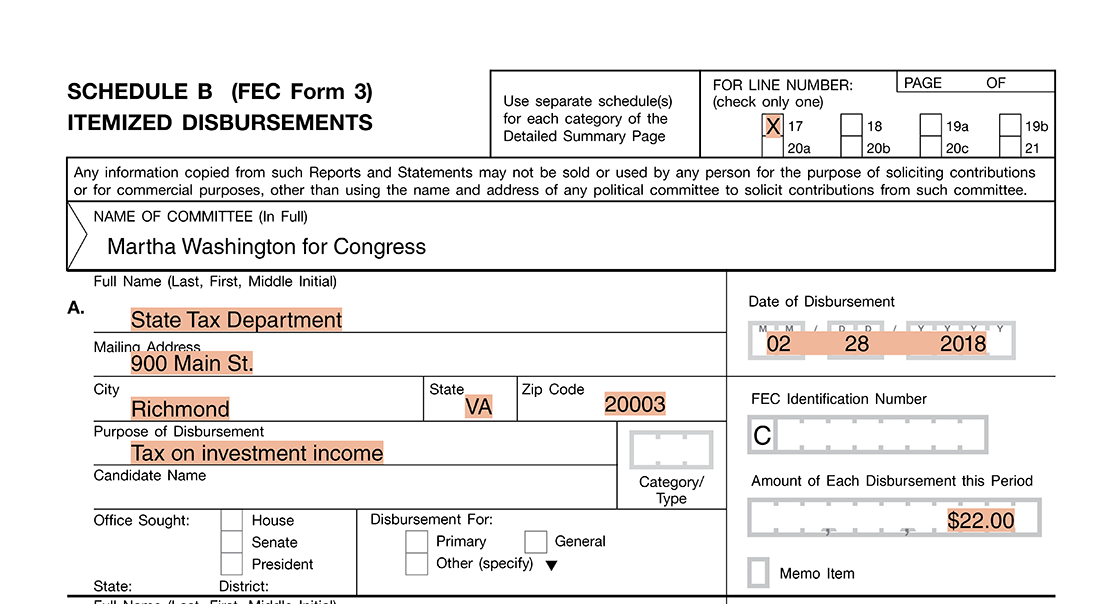 The committee reports the income tax paid on investment income on Schedule B, supporting Line 17. It includes the name and mailing address of the payee, the date, amount, and purpose of disbursement.

To enter an investment income or loss, go to the Summary Page tab, right click on “Line 15 Other Receipts (Dividends, Interest, etc.)” and select ”new.”

Learn more about reporting in FECFile